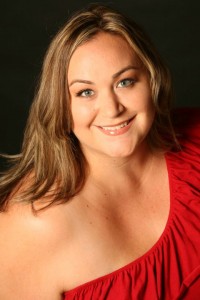 I had recently lived in New York since 2008 hoping to make a living doing something that I loved. I wasn’t sure where to start, so I began temping at various 9-5 jobs where I very quickly was offered a full-time position as an administrative assistant. About two years later I was offered another full-time position as an executive assistant, and even though I loved the company, something still didn’t feel right. So I started over again, and during this transition of unemployment a friend was introducing me at a party and wasn’t sure where to begin. So she started saying, “She’s a talented actress who happens to also create websites and every October dances Michael Jackson’s ‘Thriller’ for world records and for charity.”

I realized that I just didn’t fit into the traditional 9-5 world and was then inspired to try something else. I became a tour guide and started my own company called New York Broadway Tours A.K.A. Manada.Biz Entertainment, LLC.

From karaoke hosting to stage managing, website development/social media marketing to producing events and fundraising, or storytelling either on stage or on the streets of New York, I am living proof that you can create the life you desire and pursue your passions.

Producing your passions is what I live and breathe, and I believe that once you tap into your spiritual purpose and start listening to your intuition, you will KNOW WITH EVERY BREATH what the next step is to take.

Whenever I start working on a new project or come across something I think is awesome, I will share them with you here on my website or newsletter. If you are anything like me where you have a zillion ideas and are always on the go, then you might enjoy reading my posts and joining me.

My voice is honest, creative, direct, and warm. I welcome you into Amada’s World.

Amada Anderson is the CEO/Founder of New York Broadway Tours and Manada.Biz Entertainment, LLC. She has her Bachelor’s in Music and Theatre from the University of Miami and is an award-winning musical theatre actress, philanthropist, and entrepreneur. Philanthropic work has been felt at The Guides Association of New York City (GANYC), The Broadway Green Alliance, Planet Connections Theatre Festivity, The New York Musical Theatre Festival, The Pajama Program, Thrill The World and Thrill The World NYC (TTWNYC).

She has performed in various parades throughout New York, including: The NYC Dance Parade (led the Parade in 2013), the NYC Gay Pride Parade, Jersey Pride Fest, the Coney Island Mermaid Parade and the Village Halloween Parade.

She has been featured in online media, such as: CrowdFundingGuide.com , Humans of New York, NYC Tourist, etc.; as well as magazines and newspapers, including Zombie Magazine, the Examiner, Time Out New York, Village Voice, and Simple Magazine.

She has also been featured as an entrepreneur in the book The Power Players Guide to Playing Powerfully in the Game of Life, crowned “Queen of Karaoke” in Florida, and holds a Planet Connections Festivity acting award for “Outstanding Supporting Actress” for the role of Darcie in Andrew Rothkin’s Off-Broadway play Danny.

Her current projects include: writing her solo show musical Finding Amada’s Voice, her YouTube show called Backstage with New York Broadway Tours that interviews Broadway producers, actors, and artists in the NYC area, and being a co-host/producer of the GANYC podcast Destination New York that interviews GANYC tour guides.

“Amada is an extremely personable and capable individual. She is thorough, motivated, and a pleasure to work with. Amada would be an asset to any future employer, and I highly recommend her!”-Allison Jackson, Admissions Associate, Columbia University School of the Arts

GOT QUESTIONS OR WANT TO WORK WITH AMADA?